All You Need To Know About The Roots of Afrobeat Music 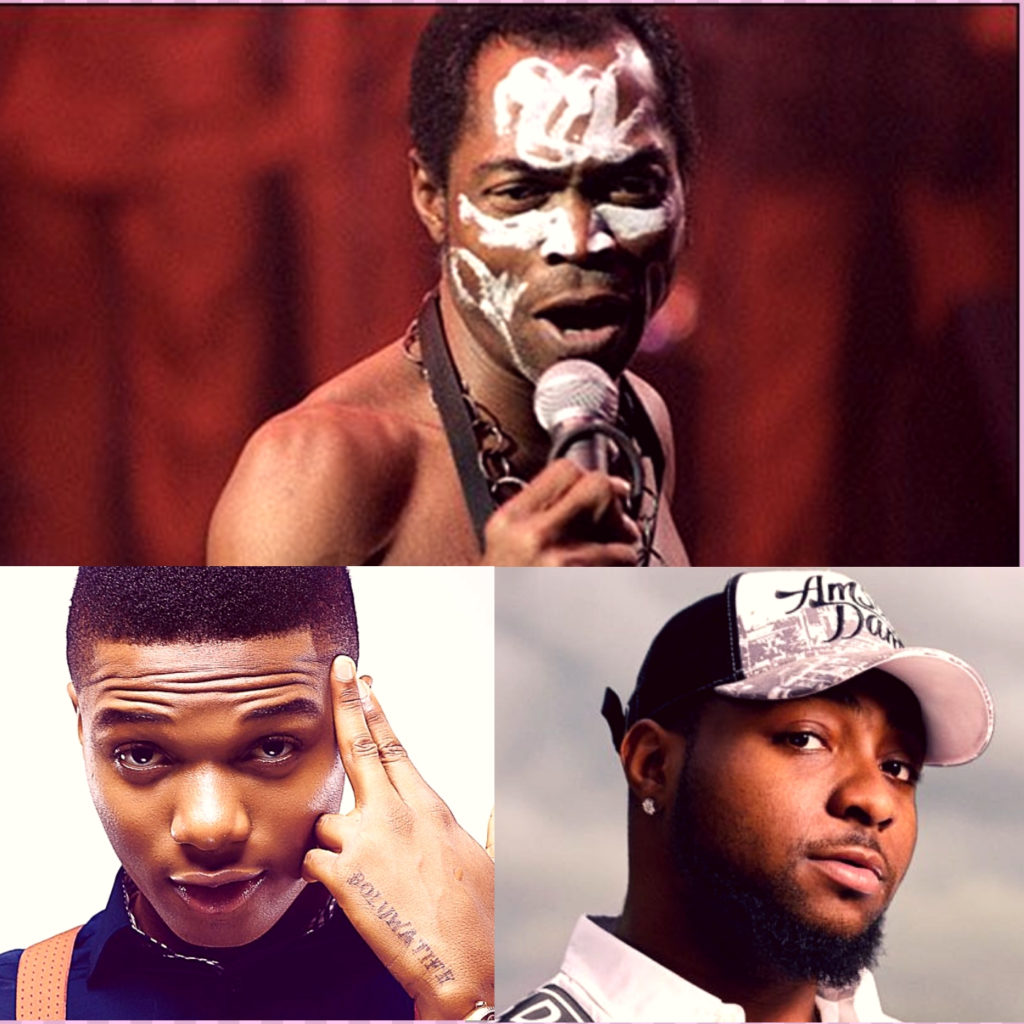 In This Article, Am going to give you a straight to the point education about Afrobeat music’s roots and influences from a true African’s perspective who’s also a music creator

Although there are a few articles about afrobeat online, almost none of them give a comprehensive look at it in details and explore it’s evolution especially in Nigeria where most of it’s growth has happened which is what exactly what this article is going to do

“Afrobeat is a music genre which involves the combination of elements of West African musical styles such as fuji music and highlife with American funk and jazz influences, with a focus on chanted vocals, complex intersecting rhythms, and percussion.”

This Definition is accurate but it’s not one any Nigerian or west African would generally use. ask any Nigerian what afrobeat is and they will tell you It’s a Genre of Music created and made legendary by fela kuti. In other words, Afrobeat=Fela Kuti period.

Am always surprised when I see singers Like wizkid, davido and other African artistes categorized as afrobeat musicians by people in the USA and UK because the style of music they do bears almost no resemblance to afrobeat as created by fela kuti and that’s why you wouldn’t find any true Nigerian associate afrobeat with modern day African music

What Today’s ” Afrobeat” artiste actually do is either afro pop or Afro hip hop with a stronger influence from highlife music (and almost no jazz and funk influences) most of the times but for ease of Understanding, Am going to use the Term Afrobeat in the broad Sense to mean music from legendary and modern day artistes from Nigeria and Ghana

LAGOS, THE CITY OF AFROBEATS

contrary to popular belief by people who are not Africans, yoruba is not the only ethnic group in Nigeria.

There are as many as 250 different ethic groups across a population of 198 million people.

THE ORIGINS OF AFROBEAT

you can check out a more detailed count about his Life and music HERE from Wikipedia .I am Just Highlight a few things Here

Fela’s Afrobeat sound definitely made him outstanding but what gave him the legendary status today (in My Opinion) was his political activism and how he used his music to challenge the military corruption in the country which cost him his Studio and equipment,the life of his mother (who was thrown to the ground from her apartment upstairs of building) and Ultimately his life in 1997

Femi Kuti has enjoyed massive success with 4 Grammy award nominations in the world music category of the year 2003, 2010, 2012 and 2013 and world wide acceptance especially in London and in the united states

Although He hasn’t really expanded the Afrobeat that much from what his father created, He has definitely contributed to the continued love for afrobeat

THE MASKED AFROBEAT ARTIST-LAGBAJA (And His Contributions To Afrobeat)

THE EVOLUTION OF MODERN DAY AFROBEAT

To Understand Why Afrobeat didn’t continue to grow in the pathway created By Fela Kuti,you need a clear picture of all the other musical influences that where present in the country after a democratic government took over the military and after the death of fela kuti

Growing Up in the Middle Belt of Nigeria in the early 1990s, There was No Nigerian Music for young people

All we listen too was music from the USA. Older people where more interested in country musicians like dan seal, don williams or christian music by Don moen,Ron Kenoly and the most successful African gospel artist at the time- Panam Percy Paul

Young Teenagers like me where more interested in Micheal Jackson, Craig David, Hip hop artistes like 2pac, dr Dre, Eminem, DMX, 50 cent and anything from overseas we could lay our hands on

There was also a Hugh explosion of Congolese music in Nigeria especial Awilo Longomba’s album-Coupe Bibamba (1998). It broke through every corner of the country.

With the arrival of computers, The Internet and cracked music production softwares like cubase, FL studio and Reason, Studios comercial studios started springing up.

The opportunity to thrill Music fans, friends and family (who where used to Karaoke and miming) with your original composition it provided was a welcomed development

A few Record Labels also showed up at the time. The Most Notable of them was Kennis Music Based in Lagos.

Artistes at this Time where either Doing Hip hop or RnB Songs. Almost nobody at the time where interested in Afrocentric music and most of these Nigerian Artiste doing songs where usually not that good but a few stood out and Went Viral

Between the year 1999 and 2013, Nigerians where thrilled by so many artistes and gradually evolved to what the world Knows as Afrobeat today

Plantashun Boiz were a Nigerian hip hop and R&B music group. It consisted of 2face Idibia, Faze and Blackface.The group was formed during their college years in Enugu, at the Institute Of Management And Technology (I.M.T Enugu)

Their whole album was a Hit. They where all really good singers and their success got the attention of Kennis Music who made the decision to pic only 2 face idibia (now called 2baba)who went on to be the most successful of the 3 who also started their own solo careers after the split

Ruggedman (From The Igbo Speaking People of The Country) was Nigeria’s first Rapper To Blow up.His Song and Music video for Baraje in 1999 was a Very massive Hit. He quickly Became an Idol for a lot of Upcoming Rappers.

Eedris Abdulkareem was The first Nigerian Afro Hip hop Artiste To Have mass acceptance both In Nigeria and a lot of African countries with both young and older people. His Success surpassed all that ruggedman had done and did during his time

On December 4, 2004, Nigerian rapper Eedris Abdulkareem did the unthinkable- he tried to fight 50 Cent on board a plane.

After performing in 2 out of 4 shows, 50 Cent and his crew were headed to Port Harcourt aboard an ADC flight. On the flight Eedris Abdulkareem tried to sit on a seat reserved for 50 Cent. The Nigerian rapper was stopped by 50 Cent’s bodyguards. Eedris was not having any of that and this led to a brawl in the plane.

As a result of this Incidence, 50 Cent decided not to perform at the remaining two shows and left Nigeria.

Even though this incident was one of the many reasons that led to the decline of Eedris’ career, it was also a catalyst for Nigerian artistes being treated better.

Timaya (from The Southern Part of the country)is a Nigerian singer and songwriter. He is the founder of South South hip hop group Dem Mama Soldiers.

His solo career began in 2005 with the release of “Dem Mama”, which also appeared on his debut album

Timaya Introduced a fresh take on what african music should sound like.He’s Music is generally more uptempo, happy and energetic.

Her 2006 Hit Song ,Ijoya, Did Really well but saddly was her last Notable song.The really Unique sound of this record is one that I see resurfacing sometime in the future.

D Bang brought a new swags to afrobeat similar to what we where used to seeing from international artistes like usher and P.diddy but with an African touch to it

His Unique sound is credited to Nigeria’s Most Remarkable music producer, Don Jazzy,who’s also responsible for a lot of Afrobeats continue growth and success

His most popularly Known for his 2012 Hit single, Oliver Twist but in My Opinion, His most important contribution to the sound of afrobeat was his first Hit song in 2005 tittled tongolo.

Olu maintain rose to prominence on May 2007 with the release of the hit song “Yahooze” from his debut studio album, Yahooze (2007)

The Drums and Singing Style on this song has defined a lot of modern day afrobeat music.

Gongo Aso is the first Afrobeat song to Inspire a cover by a none African. His Unique singing style and voice is still unmatched

Terry G, is a Nigerian musician and producer. He is widely known for his eccentric dress-sense, controversial lyrics and awkward identity.He has been described by The Punch as “one of the world’s weirdest singers”, by Vanguard as a “weird singer”, and by Channels TV as the “craziest musician in Nigeria”

Olamide,also popularly called Olamide Baddo or BaddoSneh, is a Nigerian hip hop recording artist. He records mostly in Yoruba, his native tongue. On 7 November 2013, he released his third studio album Baddest Guy Ever Liveth. The album’s Major single “Durosoke” in My opinion is his most important contribution to the growth of afrobeat.

Olamide is the most street credible artiste in western Nigeria

Yemi Alade, is a Nigerian Afro pop singer and songwriter. She gained prominence after winning the Peak Talent Show in 2009, and is best known for her hit single “Johnny”(2013)

The song was an international smash hit in many countries including Nigeria, Tanzania, Kenya, Ghana, South Africa, Liberia, Uganda, Zimbabwe, The United Kingdom and others

It was the first massive hit song by a female artiste

Phyno, is a Nigerian rapper, singer, songwriter and record producer.He started his musical career as a producer in 2003. He is renowned for rapping in the Igbo language.

His debut studio album, No Guts No Glory, was released in 2014. It produced the singles “Ghost Mode”, “Man of the Year”, “Parcel” and “O Set”

wizkid is Afrobeats most prolific artiste and is one of the top 2 Afrobeat artiste ever.He has had Numerous Hits back to back and has a way of making a song become a hit when he is featured

He rose to prominence in 2010 with the release of the song “Holla at Your Boy” from his debut studio album, Superstar (2011). “Tease Me/Bad Guys”, “Don’t Dull”, “Love My Baby”, “Pakurumo” and “Oluwa Lo Ni” were also released as singles from the Superstar album. Wizkid’s self-titled second studio album, Ayo, was released in September 2014 and was preceded by six singles: “Jaiye Jaiye”, “On Top Your Matter”, “One Question”, “Joy”, “Bombay” and “Show You the Money”

Davido, is a Nigerian singer, songwriter and record producer. His 2011 single “Dami Duro” was well-received throughout Nigeria

He is often compared with Wizkid and most people can’t make up their minds which of them should be crowned the biggest Afrobeat artist.

To Me, He’s Just as Big and Unique in his own way But he’s not as prolific as wizkid.His 2 Most Influential Songs to the Sound of afrobeat are Aye and Skelewu

He won the BET 2018 AWARD for Best International act

Afrobeat has come a long way and is getting bigger in the international space. I Recommend artistes take advantage of it’s very unique sound to standout

Nice, Your Beats and Ebook Are On The Way. Click The Confirmation Button In The Email we will Be Sending you To Get Instant Access to Your Goodies